The lighthouse problem was a computational physics lab assignment that I decided to go above and beyond for. Below is a summary of the problem and my solution.

Here’s a statement of the the problem, adapted from the Ph21 assignment: 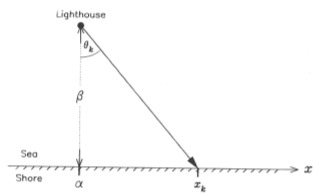 There is a defective lighthouse located at a position α along the shore and a distance β out to sea (see figure above). The lighthouse emits highly collimated ﬂashes at random times and at random azimuths (a good lighthouse emits ﬂashes at regular intervals, usually due to rotation of the lighthouse beam). A dense array of photodetectors is set up along the shore and each ﬂash is recorded by a single photodetector. The data consist of the position of the illuminated photodector for the th flash.
Consider the case where neither α nor β are known beforehand. Calculate the distributions of the logarithm of the posterior probability for a grid of α and β values. Then plot the 2-dimensional distribution of the posterior distribution as a contour plot in the α-β plane.

As you might’ve guessed from the use of the word “posterior”, the main idea is to use Bayesian statistics to infer the lighthouse’s position based on a string of photodetector data. From Bayes’ theorem:

As is typical of problems involving Bayesian conditionalization, the choice of prior is necessarily a bit arbitrary. I’ll spare you the philosophy of probability spiel, but suffice to say that it’s difficult (and sometimes impossible) to construct a truly information-free prior. Since the context of this problem is presumably a nearby ship hoping to identify the location of the lighthouse, I decided it was reasonable to use a uniform probability distribution over a small rectangle in - space, with (in arbitrary distance units) and (with the lower bound set st the lighthouse is assumed not to be inland):

Now we need to determine the form of the likelihood, , so it’s time for some math. We’re told that “the lighthouse emits highly collimated ﬂashes at random times and at random azimuths,” so we know that the emissions are uniformly distributed in : (only angles will actually reach a detector along the shore). Now… (refer to the figure),

Since the integrals are equivalent regardless of and , we can simply equate the integrands:

and we arrive at the rather convoluted likelihood function:

Fortunately, there is another useful tool our kit. One of the best friends of many physicists (or at least one of my best friends…) is Mathematica:

This simplified expression is immediately recognizable by mathematicians as a Cauchy distribution, and by physicists as a Lorentzian. Whatever you want to call it, the distribution pops up all over the place and this is a good sign that we’re on the right track. 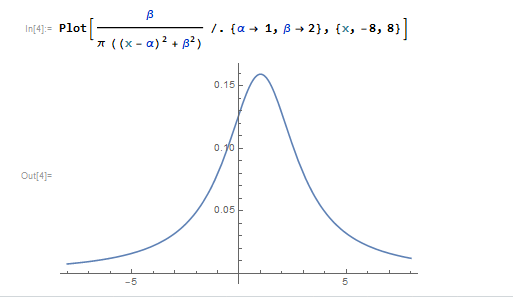 Putting together what we’ve established thus far, we have a complete prescription for how to construct a posterior pdf over the lighthouse’s positional parameters, based off a photedetector measurement :

where C is the normalization constant st

If we wanted, we could treat our posterior distribution after the first data point as an updated prior on which to conditionalize the second data point, and so on. But this is equivalent to conditionalizing on the total data set all at once:

First, I defined a set of true lighthouse parameter values, as well as a total number of flashes to generate:

Next, I discretized the plane into a 2-D grid of tuples to consider.

For a single pair, updating the probability based on a photodetector datapoint is accomplished exactly as we derived in the previous section:

where lh is the Lorentzian likelihood function specific to that particular pair.

Now, we want to iteratively update each tuple in the meshgrid after each additional photedector recording. This step is admittedly a bit gross…

Note that if all I had cared about was identifying the most likely pair after considering all data points, it would be more efficient to simply compute the sum (at each grid coordinate) of the log likelihoods over the total data set, and identify the tuple with the largest sum. I instead elected to write the more pained function above, because I had wanted to animate the Bayesian updating of the posterior distribution after each additional data point (see animations at top and bottom of page). Additionally, instead of estimating the optimal (largest posterior) pair with this brute-force grid sampling, we could survey the parameter space more intelligently by using Markov chain Monte Carlo sampling methods (and indeed this was the focus of the next Ph21 assignment), but that’s a topic for another time.